January 2015: Deborah Alecson and Dave Elpern have organized a Williams College Winter Study course, Knocking on Heaven’s Door, for January 2015.  This blog is an adjunct to the sessions we will have and a supplement to many topics we may not have time to address.

There are two great themes that peoples of all cultures have reflected upon since the dawn of time: Love and Death.  The latter has only recently been addressed in undergraduate curricula. Williams has not had a colloquium on Death and Dying to date.  In this important and ground-breaking program we will attend to central issues dealing with the experiences of dying people, grieving relatives and the care givers that attend them.  Our source material will be drawn from literature, film, psychology, philosophy, religion, ethics and the law.  Some of our sessions will feature first person narratives of individuals discussing real-world scenarios.

As we reflect upon the aging and dying process we will be exploring our own personal thoughts and feelings about mortality. Are we finite beings or does something of us continue after death?

October 2017:  This blog was designed as an adjunct to an intensive month-long  undergraduate seminar called "Knocking on Heaven's Door".  It may be useful to anyone interested in the topic of Death and Dying as it is a repository for many resources that may help the curious seeker.  Periodically, it will be added to.  DJE
Posted by Humane Medicine Hui at 10:56 AM 5 comments:

Email ThisBlogThis!Share to TwitterShare to FacebookShare to Pinterest
Labels: about, winter study 2015

This is a a portrait of the final days of an American with ALS who pursues physician-assisted suicide in the one place where it's legal for foreigners to come to end their lives: Switzerland. With unique access to Dignitas, the Swiss nonprofit that has helped more than 1,000 people die since 1998, The Suicide Tourist follows Craig Ewert as he debates the morality -- and confronts the reality -- of choosing to die before his disease further ravages his body, and he loses the option to die without unbearable suffering.

You Tube link to the PBS/Frontline The Suicide Tourist (First aired in 2007, 52 minutes) 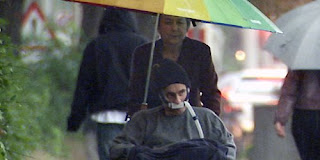 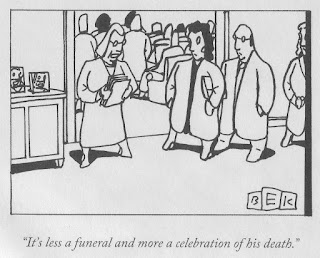 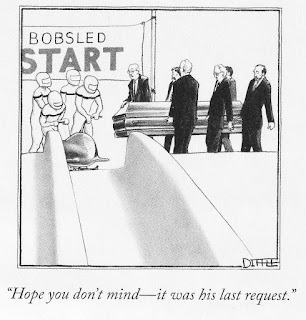 Posted by Humane Medicine Hui at 4:59 AM No comments:

Email ThisBlogThis!Share to TwitterShare to FacebookShare to Pinterest
Labels: cartoons

The Threshold: A Hospice Nurse's Encounters

The Threshold is a longish and moving piece follows a hospice nurse on her rounds in Brooklyn.  It is worth a close reading.  Excerpts follow:

The first modern hospice was founded in 1967, in London, by Cicely Saunders, who was both a doctor and a social worker: she wanted to offer homelike care that aimed to provide comfort and serenity rather than to prolong life.  Today roughly twice as many people in America die in hospice as die in hospital.

Hospice believes in caring not only for the patient but also for the family, and tries to address psychological and spiritual needs as well as physical ones.

Whenever Heather entered a patient’s home for the first time, she knew that she was walking into a long, long, complicated story that she understood nothing about, a story that was just then reaching its final crisis.  She wanted to care for her patients in a personal way, rather than racing from one task to another, one limb to the next—inserting an I.V. here, drawing blood there, scarcely noticing whose vein she was puncturing or whose arm she was holding.  She came to understand that touching itself was important, whether it healed or not; she had not realized this before she became a nurse.

Ars Moriendi in the 21st Century

Dr. Katherine McKenzie, an internist at Yale, describes how she and her family allowed her father to experience “a good death” based on an older philosophy called the “Art of Dying.  See “A Modern Ars Moriendi” (New England Journal of Medicine, June 2, 2016)
Posted by Humane Medicine Hui at 9:14 AM 1 comment:

On the most important level this a meditation on Barnes’ grief.  The chapter,
‘The Loss of Depth’, which comprises around half of the book’s length, is Barnes’ examination of his grief after the death of his wife, Pat Kavanagh.  It is candid to the point that when he moots the idea of suicide he reveals his preferred method (‘a hot bath, a glass of wine next to the taps, and an exceptionally sharp Japanese carving knife').

In ‘The Loss of Depth’ the love story is entwined in the narrative of grieving rather than parenthetically set aside, and entanglement this is the heart of the book.  There are many books in this genre, some on this blog. 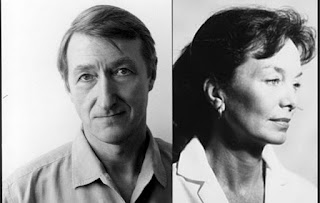 There’s who you are, who you think you are and how you want to be remembered. For Koreans, funerary portraits, which honor the dead at funerals, symbolize all three.

This NY Times article sensitively addresses these portraits and gives a bit of background.  It also has a gallery of 20 such portraits.